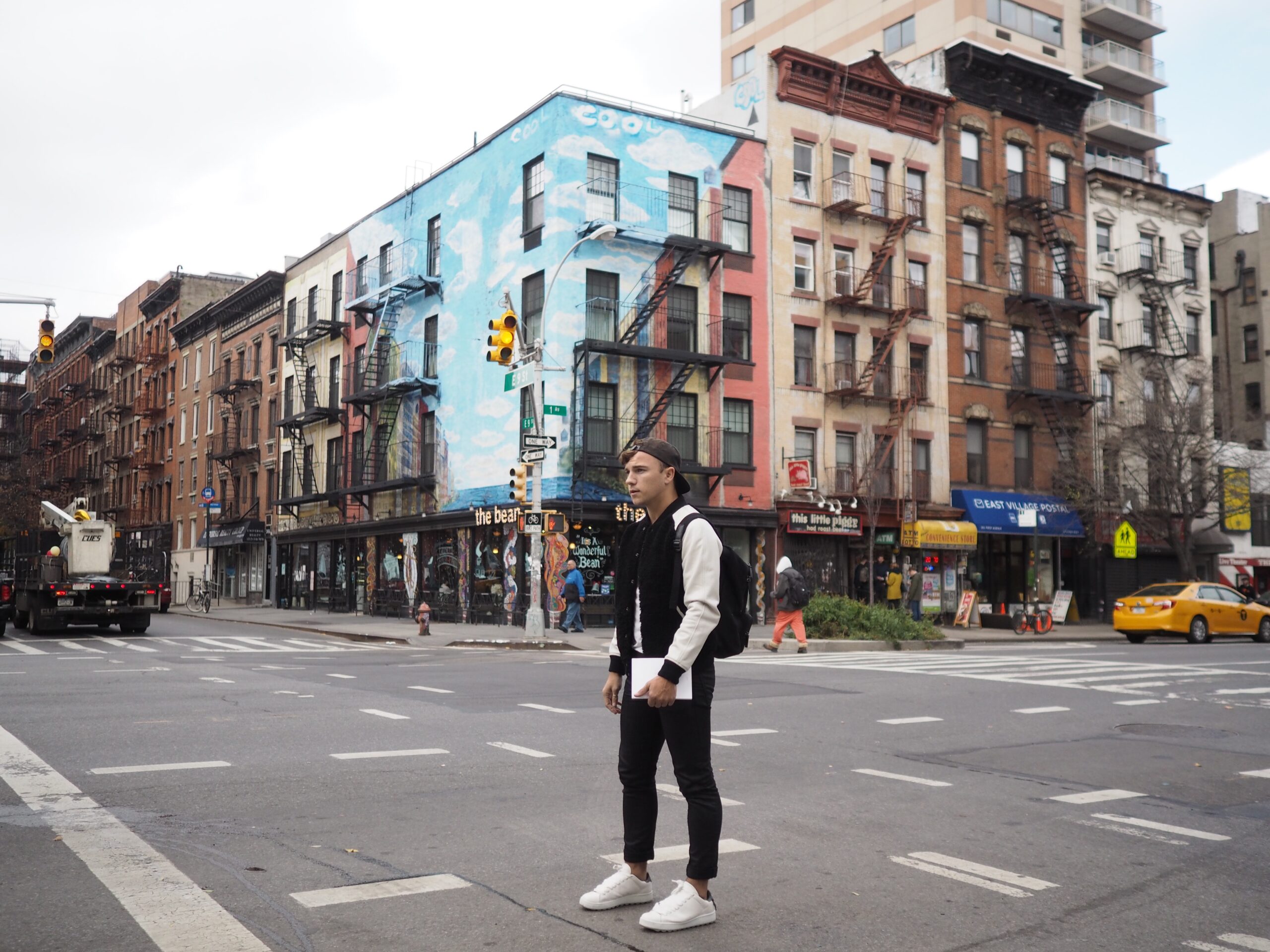 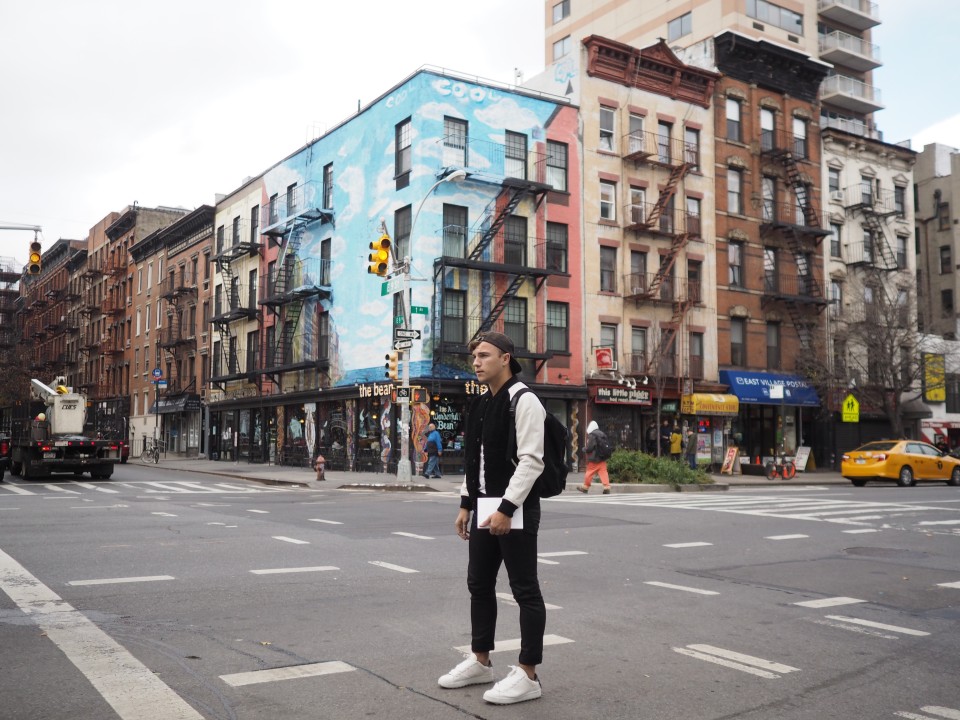 I wish I had a time machine. I wish I had a way to revisit all of these beautiful memories swirling in my head. Next spring, I’ll be moving to Los Angeles. I’ll be leaving New York City but not saying goodbye. I’d be lying if I said I wasn’t scared to leave. I’m scared as hell, but a path of new opportunities has romanced me and I need to explore.

Last week, armed with the knowledge that my last few months in New York City must be wrought with joy, sentiments, and the kind of excitement only New York City can provide– I started walking. I walked around my neighborhoods, both current and past. I walked around some of my old haunts. I just walked until I couldn’t walk any more. With blistered feet, I sat down on a bench in Washington Square Park and just cried. I cried for the old memories of New York that I’ll never relive. I cried for the new memories I’ll never be a part of, knowing that this City will inevitably go on without me. I cried because this place has given me its best and its worst and I loved both with all my heart (though I could’ve done without the sewer rats).

I can’t help but reminisce on the places that hold the most weight in my mind. Others may find them random, but these spots are so embedded with emotion that I can’t visit them without dusting off its particular sense memory. I recently partnered with Olympus to share some of a handful of these location-based memories as they are now and paint the picture of how they came to be. While I could’ve easily used my smartphone to capture these places, I wanted to see them with perfect clarity and in pristine quality… and the only brand I trust to exceed those expectations is Olympus.

So, tell me, are you ready to take a trip down memory lane? 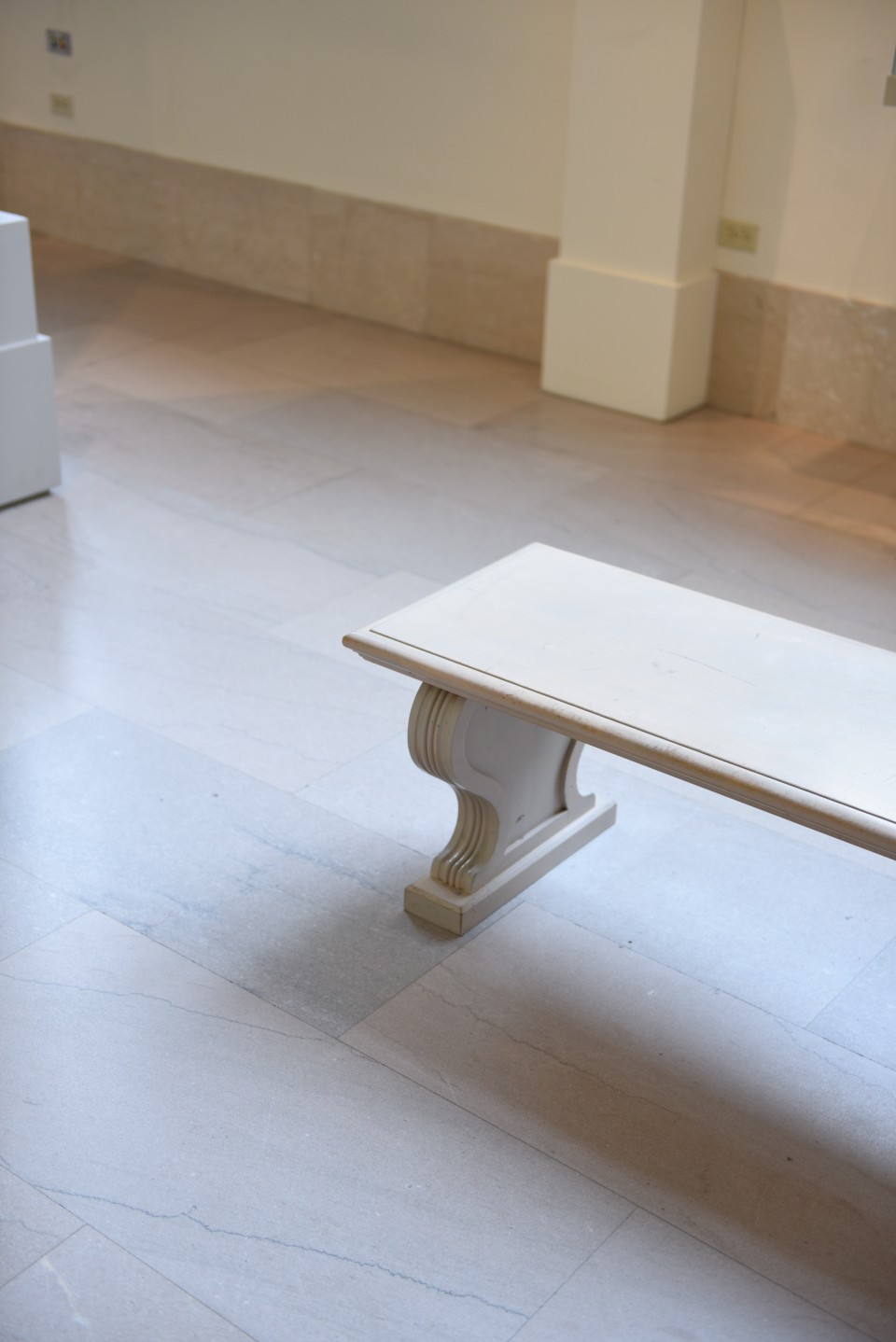 Where: The Metropolitan Museum of Art

Memory: It was my first time visiting the Met. I decided to visit my friend Lauren, who worked in the marketing department there. We met up, sat down on this exact bench catching up. It was then she told me she was pregnant. She cried, though I’m still not sure if they were tears of joy or terror. 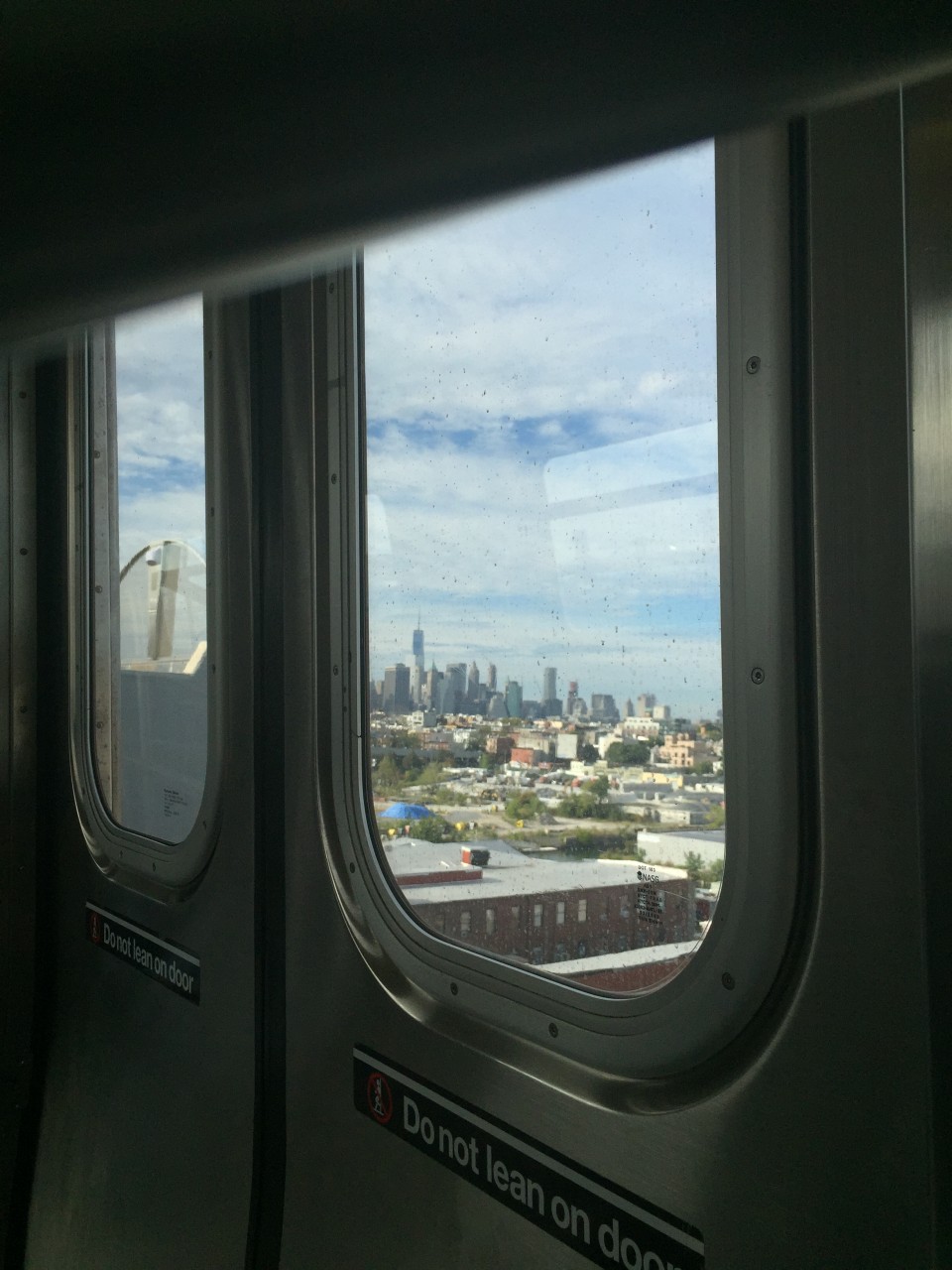 Where: the F train

Memory: I boarded the train completely exhausted and slightly drunk from a late dinner with coworkers. It was around 2AM. The train stopped abruptly above ground and I split my lip on the seat railing. I still have the scar. 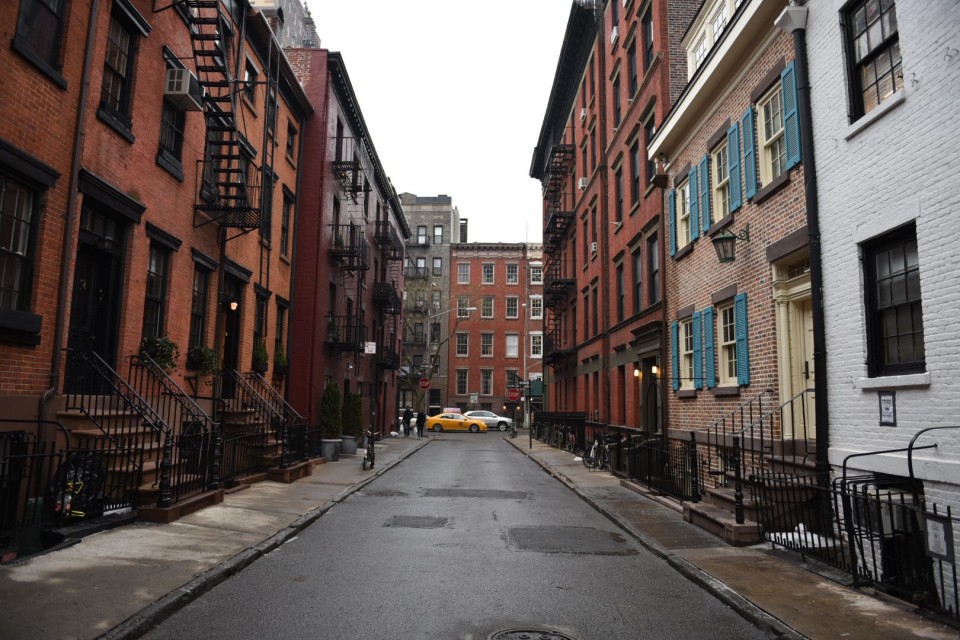 Where: the corner of Waverly & Gay St

Memory: I would stroll down this block at least once a month, it’s just so beautiful. In February I was on this street when I found out my grandfather passed away. I don’t walk down this street any more – it’s too depressing. 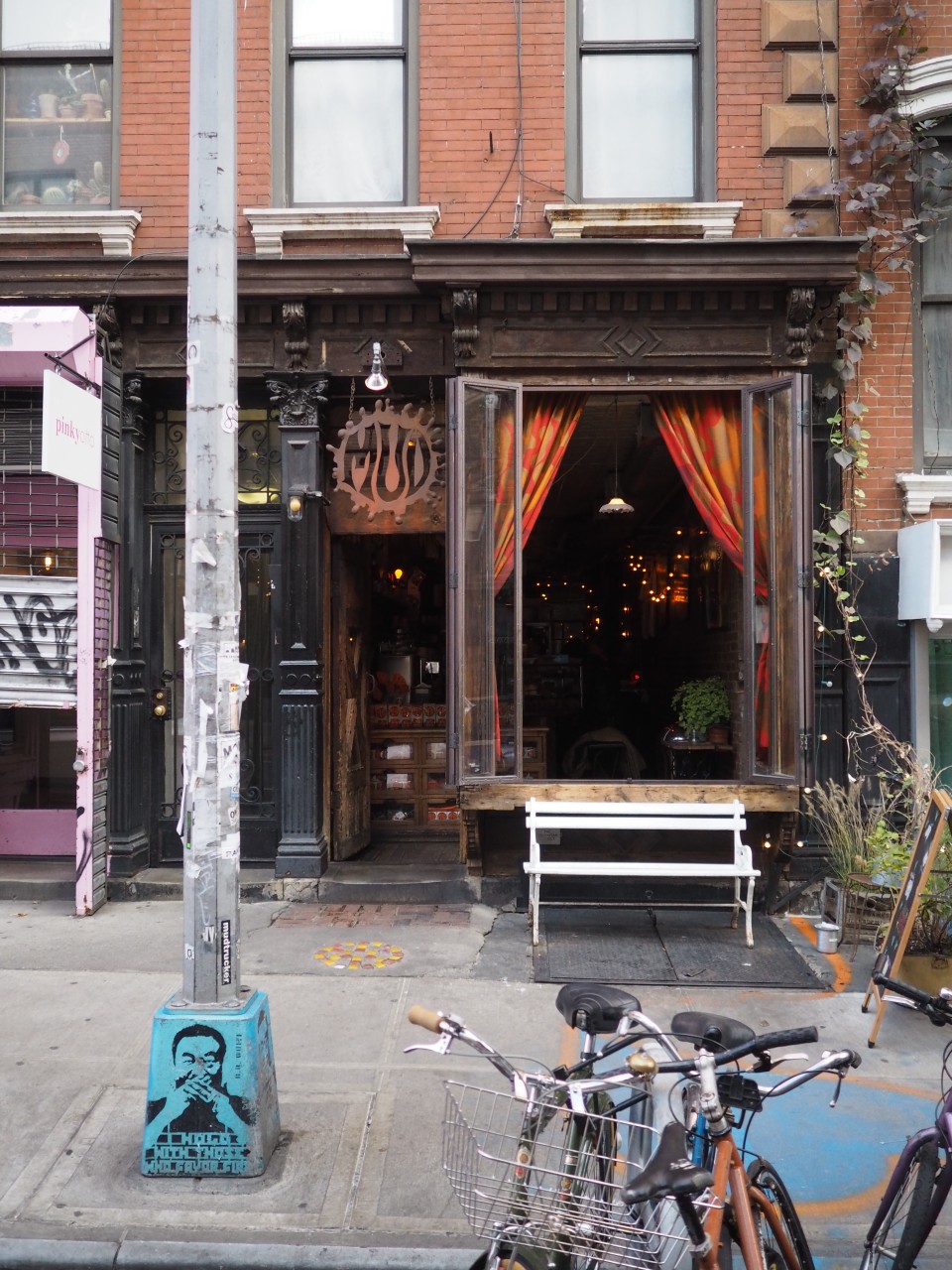 Memory: I sat on the bench outside of Mud (which happens to be my favorite coffee and brunch spot) with my then-roommate and best friend Sarah when she told me she was engaged. We screamed so loud, it was embarrassing but I’ll never forget the excitement in that moment. 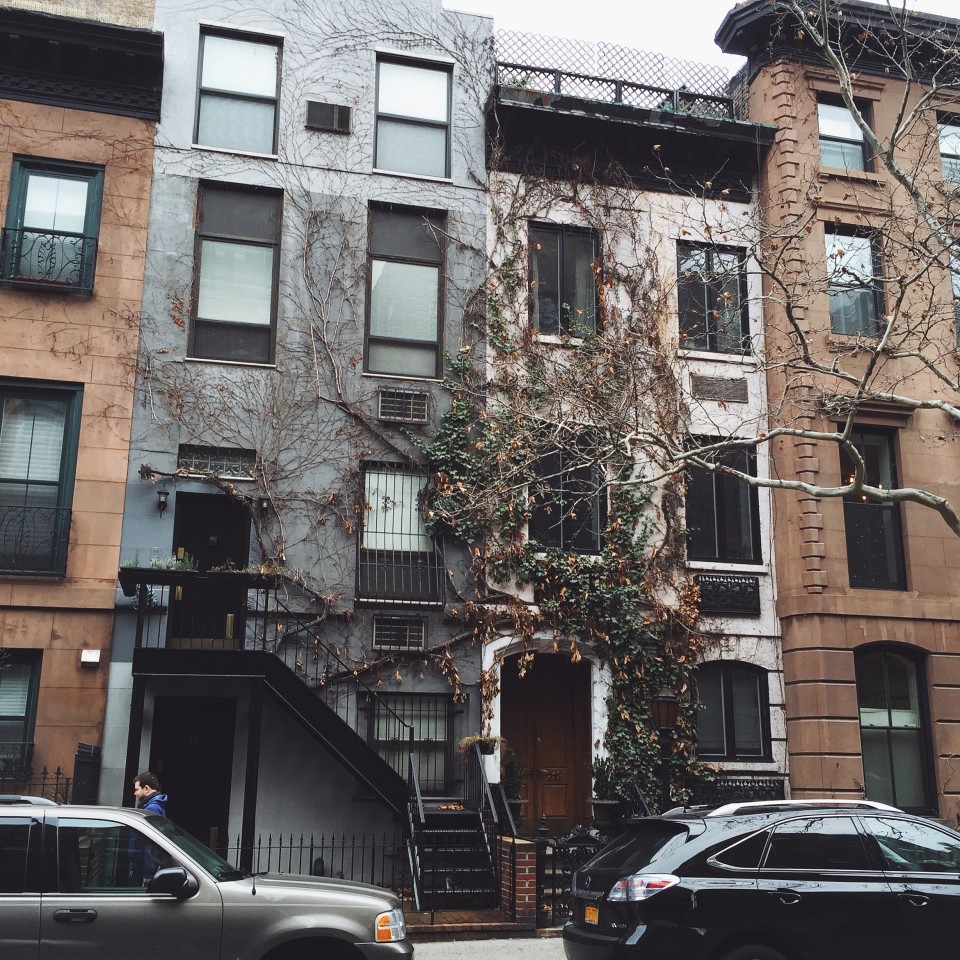 Memory: I found a Yorkshire Terrier walking aimlessly down 2nd Avenue. He wasn’t wearing a collar so I grabbed him and started walking toward my apartment, hoping I could locate his owner through the local animal vet. We only walked about a block before I was stopped in front of this stoop by his distraught owner. Clearly, the pup didn’t get very far. 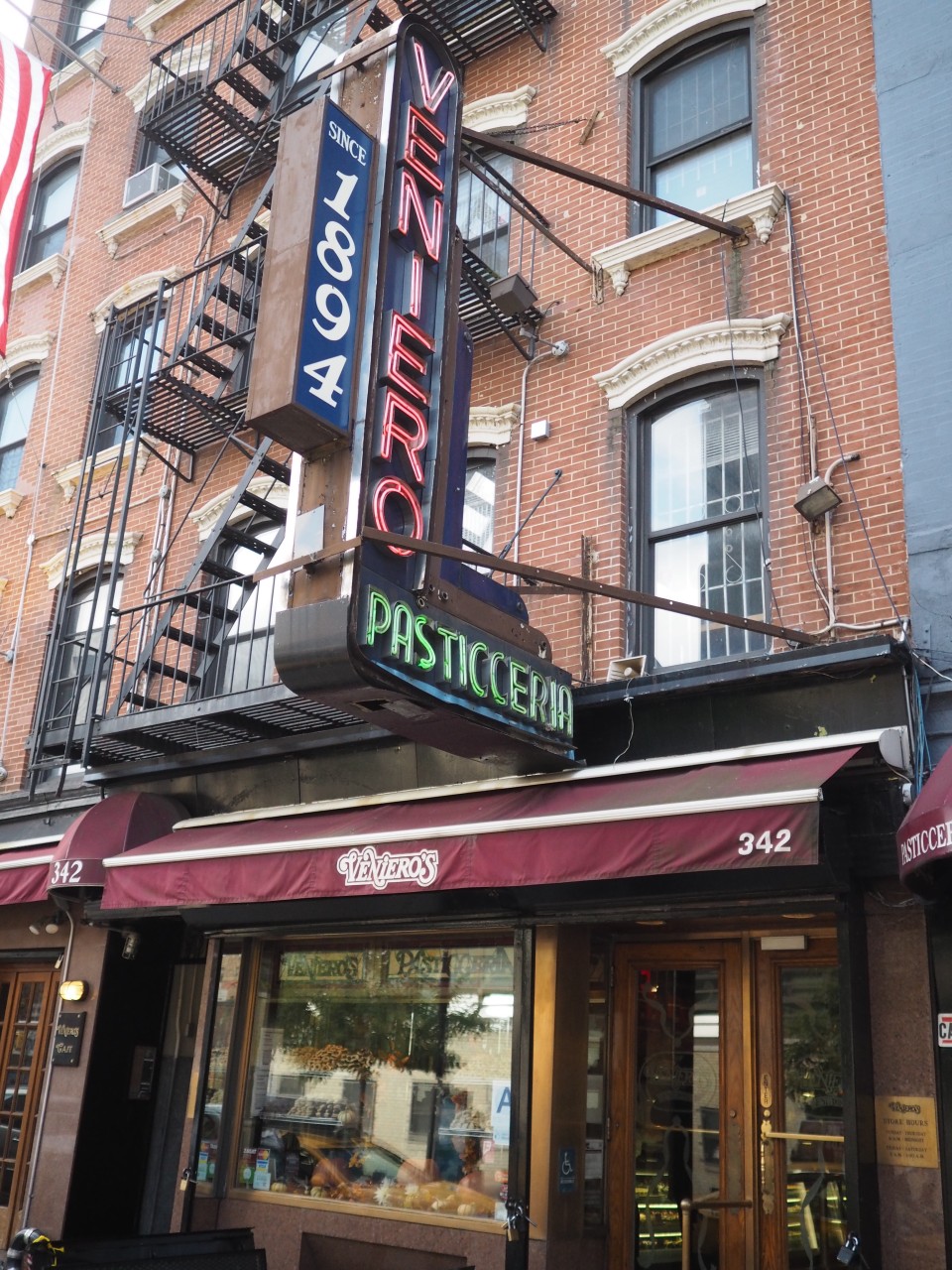 Memory: It’s an East Village institution – the best little desserts you can imagine. My then-roommate Rosa and I would go to yoga class on Sundays and then stop into Veniero’s for something sweet… chowing down on a cache of calories we certainly didn’t deserve. 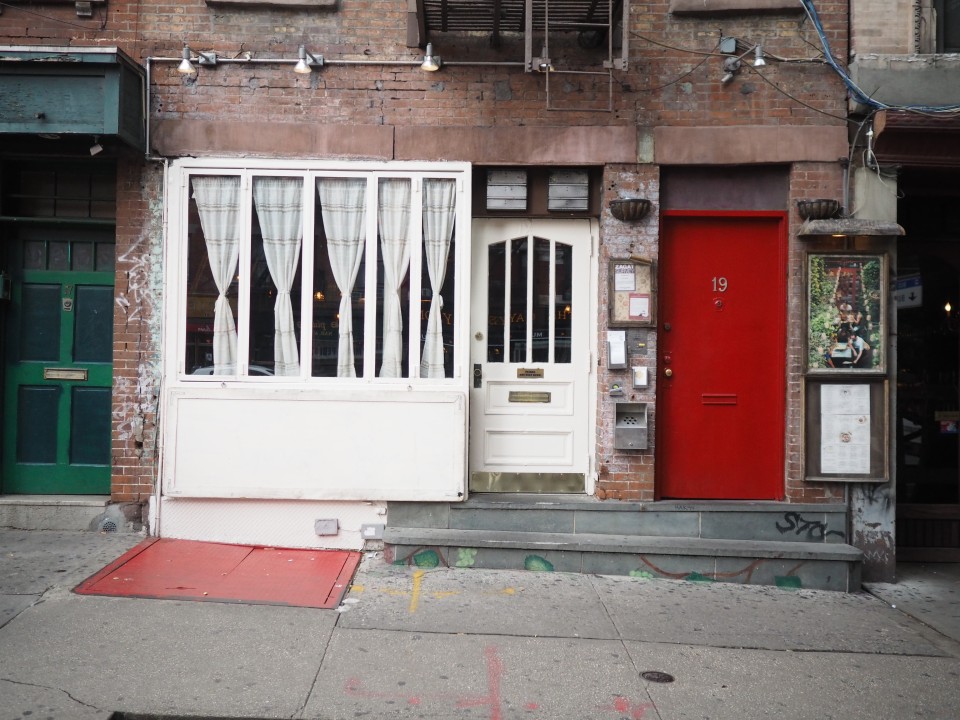 Memory: It was the first restaurant I ever ate in in New York City. It’s always been my favorite. 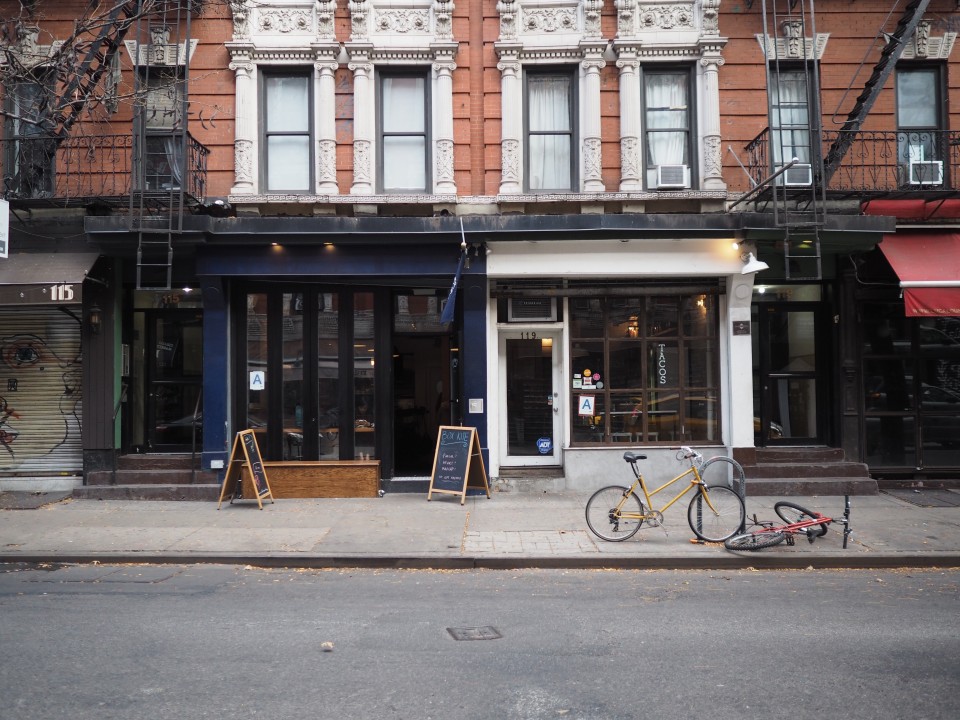 Memory: On a random Thursday, I found out I had been hired for a position at a company I desperately wanted to work for… it was my dream job. I met up with friends at an apartment in this building where a congratulatory cake was waiting on me. It was red velvet and it was so good that I had three slices. 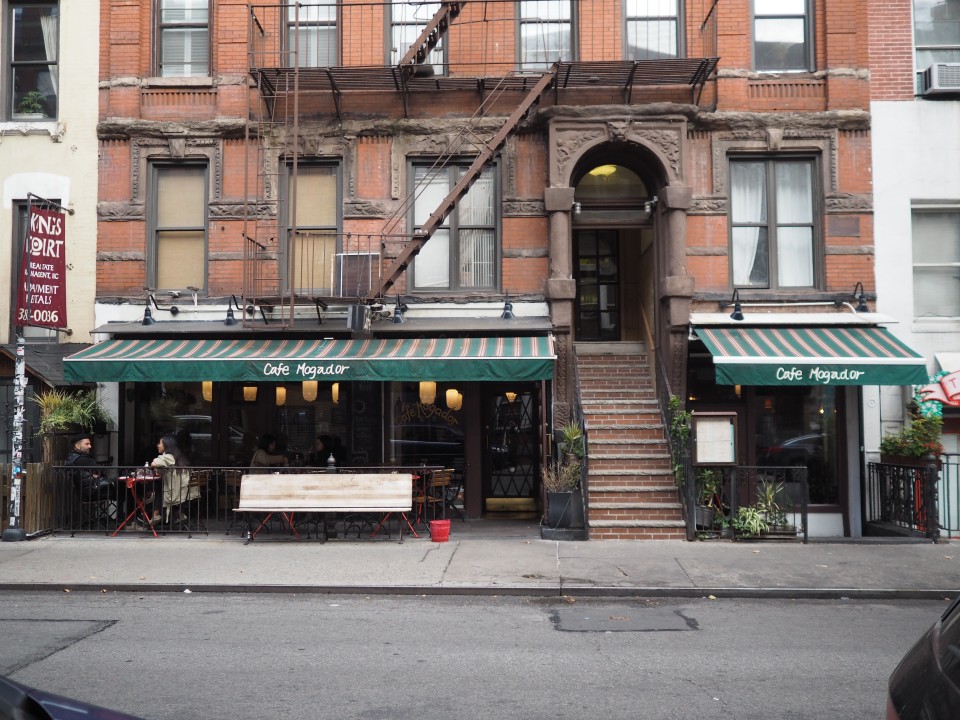 Memory: This was my favorite spot to eat brunch with my current roommates and best friends. At one particular brunch, we were sitting outside and a stranger told me I had beautiful eyes. I was so caught off guard that I started choking on my food. It wasn’t my finest moment. 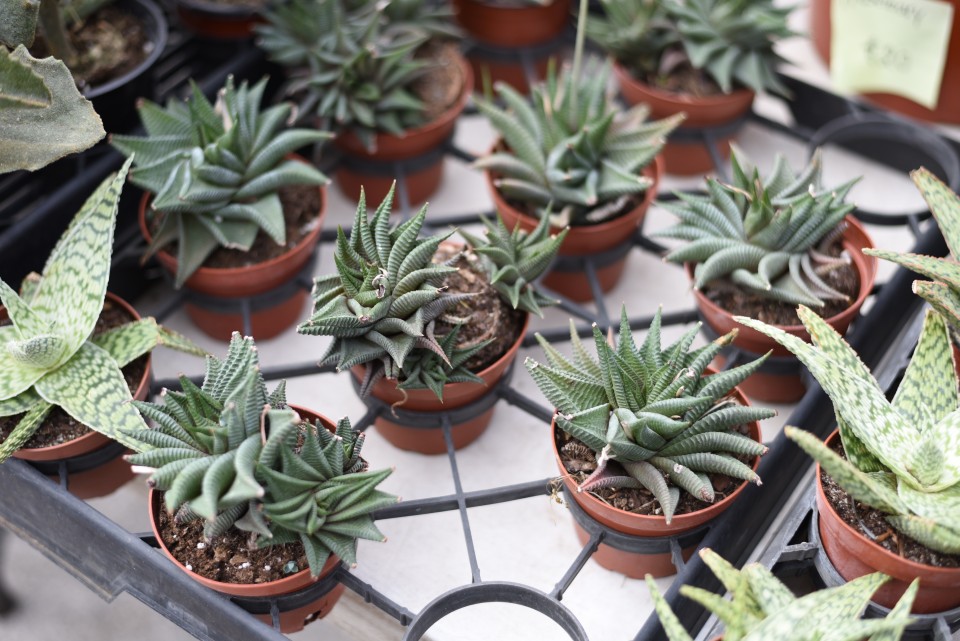 Memory: I would wake up early on Saturday mornings to go to the Union Square Greenmarket with my then-roommate and best friend Rosa. We would buy sweet breads, walk around, and spend too long perusing the tables of succulent vendors. I can’t walk through without thinking of her and our cacti obsession.

Where: intersection of 9th Street and 1st Avenue

Memory: A bike messenger ran into me while I was standing in this spot hailing a cab. I broke my finger falling backward. I decided to meet friends for happy hour before heading to the hospital… clearly my priorities were in order. 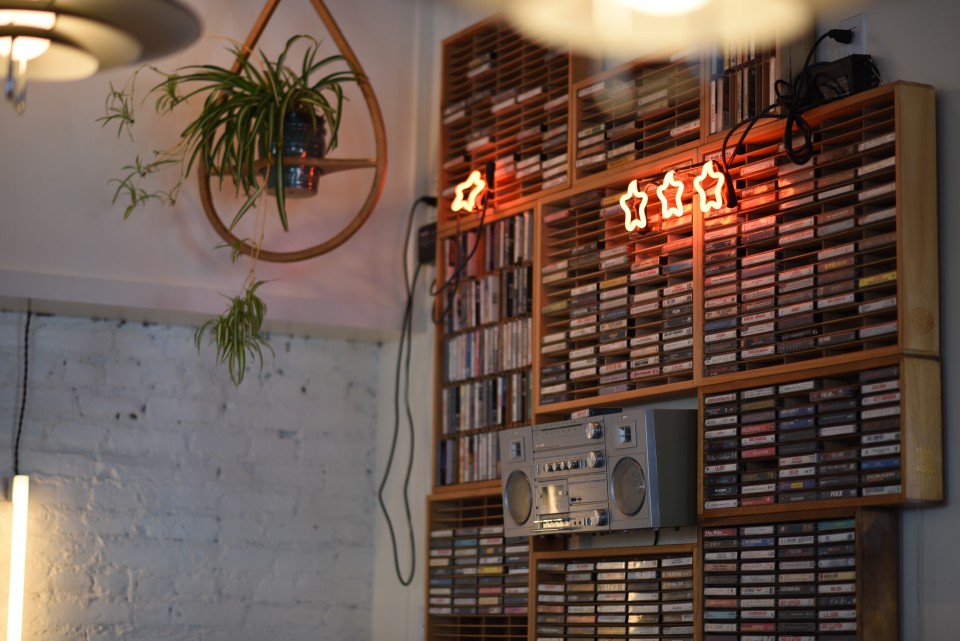 Memory: Wandered in here one summer day with my best friend Serena. I had little expectations for the experience but ended up having the best burger ever. Plus, you can’t beat a spot that blasts Heart from a wall-mounted tape player.

This post was sponsored by Olympus and shot exclusively using their Olympus PEN E-PL7 camera with an f/1.8 17mm lens. All content and opinions contained here are my own and do not reflect the opinions of Olympus.

If you’re looking for literally the greatest compact camera, snag an Olympus PEN E-PL7. It is hands-down the most incredible camera I’ve owned and gives me the portability I like in my smartphone but with performance and clarity far beyond anything a smartphone can provide. The PEN E-PL7 graduates my most cherished moments to long-lasting memories with images as crisp and clear as the moment I lived them. Put down the smartphone and pick up an Olympus, your future self will thank you.